What makes a movie great?

In the wake of so many similar films, I’d like to give advice on what I feel makes a movie worth watching. Foremost, it should be fascinating; even if it’s a horror. Matthijs van Heijningen Jr. version of The Thing was a remarkable prequel that experimented with the notions of human trust and isolation.  Just as an actress refrains from nudity unless it is relevant to the storyline, so should blood and gore be limited. Secondly, the film should be enlightening. Why devote your precious time to something that isn’t going to change you. I know people with thousands of dvds in which only one of them is worth watching. My collection can be held in one hand. Movies like The Count of Monte Cristo  or The Time Machine  sensuality has so many moralities that they alter you.  A good film should impulsively change the viewer. 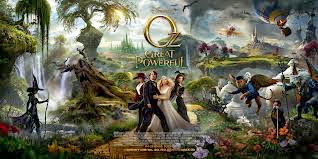 Recently, I again viewed the prequel Oz: The Great and Powerful. This is a film that has not received the acclaim it probably should have, perhaps because older fans were expecting more of Dorothy and younger fans wanted more magic. The fact is, there are many reasons Dorothy (and her Ruby Slippers) cannot be included in the films. Yes, I said films. There will be more coming, all taking place long before any Dorothy arrival. They will center on development of Oz and the three witches, which I find fascinating.
I’m not necessarily stating it was a great movie. However, people just don’t appreciate the small aspects of quality. Admittedly I did not care for James Franco as the Oz or for the comical relief of the Monkey. But these were more than compensated for by the presence of China Girl, who tied directly into concept of inanimate objects in need of something. Still, the small aspects I speak of are in the subtle lines. When the wicked Theodora puts her hand out and the Quadling’s broom floats to her, she says: “It was a broom that you wanted, wasn't it, Wizard?”


Not only was that great acting, but that single line (even though there were others) solidified the entire movie for me. You can’t hold it against someone for giving you what you actually wanted.
Posted by JP at 6:16 AM